Puppy’s Plot to Push Me Over the Edge

I’m pretty sure my puppy is plotting to drive me absolutely bat $h!t crazy…Crazy enough to be taken somewhere far, far away where I can get the necessary help.  Sure, Finn is a cute little guy and for the most part fairly innocent looking, but I think when he is alone in his crate, he is busy plotting and planning his revenge on us humans.

You might laugh and think puppies aren’t that smart but I have proof…Proof that Finn is trying to drive me crazy:

Exhibit A – Counter Surfing:  He constantly surfs our counter tops and I do not know how to stop it.  Any suggestions?  One night he even stole my dinner off the counter.   I was downstairs walking on the treadmill for 20 minutes and when I came back upstairs to eat dinner, imagine my surprise when dinner was missing…gone…vanished…poof?!?!  I did find two super happy dogs nearby so I knew Finn scored the goods with his super counter surfing skills and both he and Theron enjoyed my dinner.  Are dogs even supposed to like Taquitos?

Exhibit B – Begging at the Dinner Table:  Need I say more?  Even our adult whippet, Theron,  who is very sophisticated, partakes in the dinnertime begging.  She’s just smart enough not to get caught on film.

Exhibit C – Paper towel destruction:  This drives me crazy on two levels.  One, paper towels are not cheap.  Two, when he shreds them, pieces of paper towel end up all over the house and it’s a pain in the butt to pick them all up.  Notice Finn looking away like he has no idea why I’m so mad?

Exhibit D – Stealing Boot Liners:  Sure, he loves chewing on the actual boot, but he finds a certain pleasure in carefully removing all the liners from our shoes and boots and hiding them making it impossible to wear said shoe or boot.  The fluffy boot liners are the best. Again, notice the smug look on his face?

Exhibit E – Stealing Treats from Jacket Pocket:  Yep, he’s a thief.  I was sitting on the couch one day and he brought over a snack and ate it in front of me (like he was trying to make me jealous, whatever).  He left then came back with another one.  What???  Where are the treats coming from, anyway?  So I watched where the little bugger was going and he kept going back to my husband’s jacket where there is a secret snack stash in the pocket.  Guess what honey?  The snack stash is no longer a secret.

Exhibit F – Couch Hogging:  We do not have a lot of seating in our living room…Enough for the family which consists of 3 humans and two whippets.  But in order for all of us to fit on the two couches, there is some seating  strategy involved.  We all know where we belong on the couch…except for Finn here.  He basically took up the entire couch when he fell asleep one night so the rest of the family had to come up with a new seating strategy.  And another thing, what kind of dog sleeps like that anyway?

Exhibit G – Mocking Me:  You may not be able to tell in this photo so let me explain.  This is a picture of a whippet puppy, Finn, trying to make me jealous by hugging my husband and then sticking his tongue out at me probably thinking, “Neener, neener old lady.  He loves me more than you.”

How could I not go crazy with all these puppy shenanigans taking place day in and day out?

Does your dog or puppy ever do things that drive you crazy?  Or are you too crazy about your dog to even notice?

So we got a puppy this weekend.  It’s really quite awesome.  He’s a beautiful whippet named Finn Fandango.  He’s not the “fast dog” in my “slow girl fast dog” name.  Not yet anyway.  That’s Theron…the fast one.  Finn is the 10 week old, energetic, highly curious, and kind of klutzy puppy we recently acquired.

I’m embarrassed to say that I’ve turned into THAT Lady.  You know the one…she incessantly talks about her kid, or cat, or dog or whatever the big deal in her life happens to be at the moment.  I think I’m that lady.  Like a Dog Lady.  Not that I have a lot of dogs but let’s put it this way, I have more pictures of my dogs than my child.

The good thing is, when I show my puppy pictures to people, they get to see an adorable dog, not some odd-looking newborn.  I know you know what I’m talking about.  How many cute 10 week old babies do you know (besides your own, of course)?  Honestly?  My husband and I have a code word for the not-yet-cute newborn.  It’s U.B. (Ugly Baby).  If we’re walking in a store and see one we look at each other and whisper, “Oh my gosh, did you see that U.B.?”  I know, I’m going to hell for even saying that but it’s true.  I have to wonder if the cute gene even kicks in prior to 10 weeks.  My kid certainly wasn’t all that cute when he was 10 weeks old.  But 12 weeks?  He was freaking adorable.

Anywho,  I am going to be THAT lady who goes on and on and on about her cute puppy and all the amazing puppy things it can do.  I will look a cat person straight in the eye and tell them a puppy story knowing they don’t care but not caring that they don’t care.  The way I see it, if you don’t love a good puppy story, what kind of human are you?  Probably one that be joining me in hell for coining the UB term.  Just kidding, we’re not all going to hell.

It is clear that I will end up raising this puppy similar to the way I have raised my son:  Totally overprotective, completely oblivious to flaws (because there are none), and full of quasi-psycho adoration.  Yeah, I’m pretty sure parenting a puppy will be along the same lines as parenting a child (less the birthing, breastfeeding and burping).  But everything else…Totally the same.  🙂

Here are some examples: 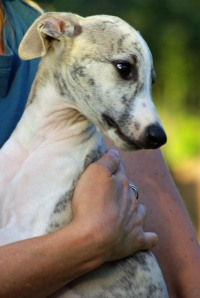 Finn posing for the camera

My first weekend of puppy motherhood I’ve come to realize how true that old saying is, “With a great puppy comes great responsibility.”   My family and I have agreed that it takes a village and we are all up to the challenge of committing to good, solid puppy parenting.

Even our other dog, Theron, is on board…well, kind of.